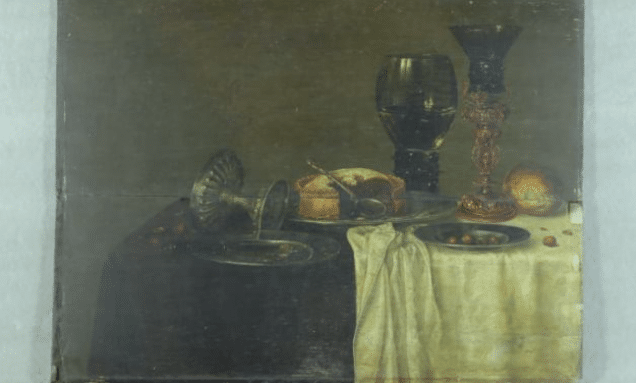 Many of us fantasise about uncovering an item of unimaginable value in our attic. Perhaps this old doll is worth something? Maybe this book could sell for a good figure? Does this painting have a famous signature? A great find could help with the bills or even pay off the mortgage. But what if your spring-clean uncovered a Dutch Master? In Australia this month, one lucky person did just that.

The painting, ‘Still Life’, currently attributed to Gerrit Willemsz, was recently stumbled upon during a restoration project on a property in New South Wales. The Woodford Academy, managed by the National Trust of Australia, is one of the oldest colonial buildings in the Blue Mountains. It’s just the kind of place one imagines holding a secret like this.

That’s not to say the finding was expected. Estimated to be worth millions, ‘Still Life’ depicts a hedonistic table setting typically associated with the Dutch Golden Age. One that National Trust collections manager Rebecca Pinchin heralds as ‘one in a million’.

How Did a Dutch Master End up in an Australian Storeroom?

Thought to have been purchased for $30 AU dollars by Alfred Fairfax in the late eighteenth century, ‘Still Life’ was possibly acquired as part of the fashionable (and retrospectively inspired) trend of buying up Dutch Masters. Alfred, the nephew of James Fairfax, founder of The Sydney Morning Herald, is thought to have brought the painting to Woodford, where it sat undiscovered for the next century or so.

Coincidentally, the find came one week after The Netherlands and Australia celebrated the 80th anniversary of bilateral agreements between the two countries. Australian Prime Minister Scott Morrison penned a statement to mark the occasion. ‘From the Duyfken’s exploration of Australia in 1606 to the contribution made by generations of the thousands of men and women of Dutch heritage to this country, Australia and the Netherlands share enduring bonds of friendship and family.’

Eight decades of agreements are significant, but Morrison touched on the actual length of the relationship when he mentioned the Duyfken. Chartered by Willem Janszoon, The Duyfken left The Netherlands in 1603. As part of a fleet of twelve ships commandeered by Steven van der Hagen, it was headed for the East Indies.

When the fleet departed Java, Janszoon split off to head south, searching for more trading partners. Although believing what he saw to be the southerly most part of New Guinea, when he sighted land, it was, in fact, Australia. Indeed, The first European to touch foot on Australian soil was not English but Dutch.

Landing at the place in Queensland now known as Weipa, Janszoon found the surrounds muddy and the people (understandably) inhospitable. He decided to high-tail it out of there, unknowingly changing the course of history.

Janszoon may have failed to establish the trade relationship he sought out, but since then, things have changed. ‘The strong trade relationship between The Netherlands and Australia is the foundation for our collaboration in other areas, such as the green economy and cybersecurity. Through our growing engagement with multilateral fora, we will work together to advance our mutual economic prosperity and stability,’ said Morrison.

While relations between the two countries have always remained positive, the most significant period was during and immediately after the Second World War. Not only were Australia and The Netherlands allies, but post-war, Dutch people migrated to the Land Down Under in their droves.

The evidence of cultural exchange is seen in immigration patterns and the hallmark of Dutch culture – art. Dutch Masters turn up in Australian storerooms, and Australian masterpieces are found in Dutch galleries, too.

Today, 240,000 Australian residents claim Dutch ancestry. That’s a lot of bitterballen at the barbeque. Forming one of the largest groups of the Dutch diaspora outside of Europe, a few of those residents undoubtedly spent the last fortnight searching for a Golden Age painting in the attic.